The sky is not the limit, it is the beginning.

A review from one of our builds

As the title of this special suggests the Belgian company D&C builds guitars that are made of metal. Can it get more metal than that? For a fixed amount builder Dennis Louis makes every guitar that you can think of. The shape, the hardware, everything is your free choice. You can also fully customize guitar on looks. Would you like to have a pattern, or do you want metal dices as knobs, perhaps you want a list of symbols? Just name it and it can be arranged. As a result, you are not only talking about guitars, but actually about pure art. Recently Dennis send me two of his projects for review. One Metalcaster and a very cool tribute Metallica Guitar. I will discuss them here.

First the Metalcaster, and obviously this name derived from the Telecaster. The body is metal, and the neck is maple/rosewood. It has medium jumbo frets and comes equipped with 2 PH90 (P90's with humbuckers size). It looks and feels like a telecaster, but it does not sound as one. It is a rock/blues guitar and rocks like mad. He sounds warm and full and really nice. The metal sounds a bit different than wood, but certainly not worse or better, just different. Personally, I can appreciate a Tele and what cool is, is that this includes the 'twang' sound what I like. This is a guitar with which I could hit the stage with.

Now to the D&C X-Fusion Metallica. Body of metal, mahogany's neck, fretboard of dark indian ebony, Grover tuners, and of course the EMG James Hetfield signature set (active). This guitar is just pure guitarporn and nothing more and nothing less than that. Ultimately, it is the intention of Dennis that this guitar goes into James Hetfield’s direction as a gift. The guitar is wrapped a big huge and especially heavy flight case specially tailored for this guitar and on the case state the logos of Metallica and D&C. Also not just the guitar is in the case, but also a Diodak Ghost guitar copy of it. The top is in the shape of the Explorer and the bottom has the shape of the Snakebyte along with also a bit of the Ibanez Destroyer. Furthermore it has the skull logo on the body and various titles and quotes. Also are the names of the present members on the guitar including Cliff out of respect. This guitar sounds very different from the previous, logic because of the setup, but also sounds fat and smooth like butter.

Definition is good, sound is good and strange however that despite the metal instead of wood and the holes this can sound that good.

Is it art or is it a guitar that you can use on stage? The answer is both! The metal sounds different from wood, but certainly not better or worse. You would also think that the holes will give more feedback and that the guitar sounds like a semi-hollow, but actually, that is not the case. Also, since D&C is custom made, they can also be made with a solid body with for example Bareknuckles and there I would be quite curious about how that would sound... pedal to the metal! With a D&C you have a unique guitar that really is too cool for words and that is worth something. Check out the sites below for more info and pictures. Play metal with metal. 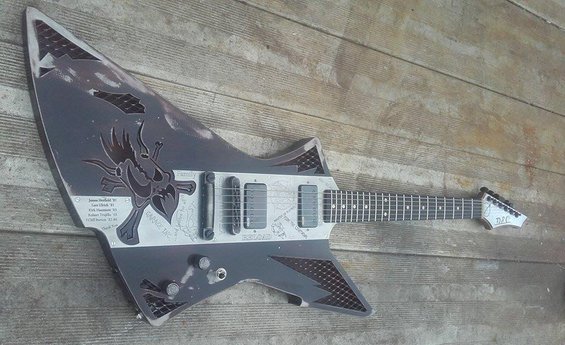 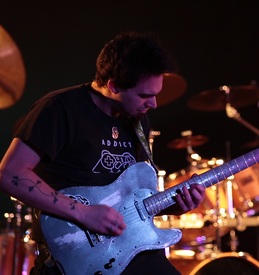 I discovered guitars D&C during my concerts and I started working with them on a custom model. The guitars are very well made, with great care present on each instrument parts. The neck is very nice and the weight is amazing (especially when we tell you that these are metal guitars, you tell yourself that it must weigh a ton). As for the pickups, they are selected with care and D&C is always in search of the authentic and pushes his own limits to your dreams. Guitars made with passion for passionate people. 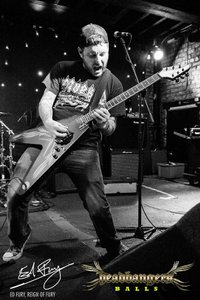 "We got in touch with Dennis at D&C via our charity UK tour Headbangers Balls, raising awareness for Testicular Cancer. Amazingly, he offered to design and build a bespoke guitar as a donation for our cause. We threw some ideas around, and decided on the V shape as a classic 'metal' style. Dennis took some elements of our logo and shaped them into the body work, and had some custom pickups made with a unique serial number. The result? Perfection. We loved the guitar, and have never seen such an unusual and beautifully crafted piece before. Once we'd received the beast the bands on the tour all had a go and everyone was surprised at how it felt for a metal body guitar. We auctioned her off for our cause and made a stack of money, and we're incredibly grateful that Dennis dedicated so much of his own time and money into our cause, and gave us such an exceptional instrument."

I've had Some aluminum Guitars before AND was looking at Trussarts for a steel guitar but I didn't like the necks. Then I discovered D&C right here in Belgium. You know what I really like is that he builds them, without plugging them into an amp at first. If they sound well acoustically, they sound well plugged in. And they do...the twang of a Tele and a touch of resonator with custom wound pick ups from hell for a juicy fat tone...and sustain forever. Almost everything about the guitar can be customized from PU configuration, necks, Bigsby, and even the cutting of animals or engraving into the steel...I love the rusty looks and the balls of tone!

When you want to talk metal and guitars, what is more impressive than guitars with an actual metal sound box? D&C Guitars from Belgium has beautifully decorated, metal hollow-bodies, of which I personally tend to question how much that will resonate. But he is welcome to send us a piece and persuade us the opposite, but for the eye it could be very pleasing to many a collectors. It is not a secret that among guitar lovers there are those who prefer quantity, but even for those guys D&C could earn a prominent spot. It was his first fair, but I think he had quite some stir around his booth. I personally was quite impressed with is X-fusion, a blend of the Gibson Explorer, the Ibanez Destroyer and the ESP Snakebite.