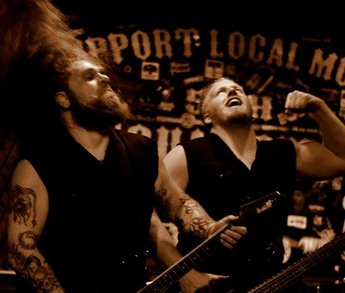 Joshua Hall started playing guitar at the age of 7 and was in and out of a few local bands before co-founding BXB in 2013. While his guitar heroes are James Hetfield and Zakk Wylde, his biggest inspiration to play guitar was his dad. BXB is a fresh, talented band with a lot of passion.

Formed in August 2013, Lynchburg, VA brings you the Christian Metal band, "BoughtXBlood" (BXB) -whose sound carries a fresh, new presence to the Metal scene. That presence being the message and hope we find in Jesus Christ. With lyrics that are upfront in meaning and Gospel engaging, BXB seeks to reach others for Christ through the life-changing power of The Gospel. The name, "BoughtXBlood" is a declaration from the band saying, whose we are, and what we are about, "for you were bought with a price. So glorify God in your body" - 1Corinthians 6:20. Their debut EP "Restoration" was released on November 14, 2014 on iTunes, Spotify and Google Play. The band's sophomore EP, "Rebirth//Reanimate" was released on September 13, 2016 also on iTunes, Spotify and Google Play.

More information about this band

D&C Custom Guitars uses functional, analytical and marketing cookies to keep our website functioning correctly and to provide you with personalized advertising. When you click on OK, you give permission to place all these cookies. If you prefer not to have marketing cookies, you can simply close this message.